May 20th at #KBtribechat – Gourmet Kitchens

Sponsored and Hosted by GE Appliances 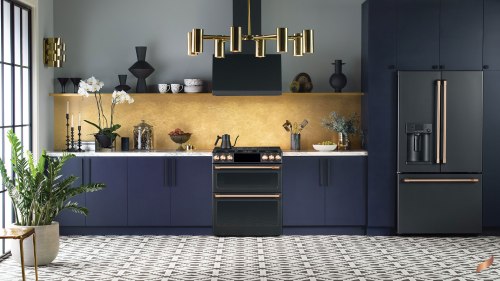 Many people are taking on DIY projects and reimagining their homes during this lockdown period. If you’ve thought about upgrading your kitchen, join us for a Twitter Chat hosted by GE Appliances on Wed., May 20 at 2 pm ET. We’ll discuss design, finishes and features of gourmet kitchens. 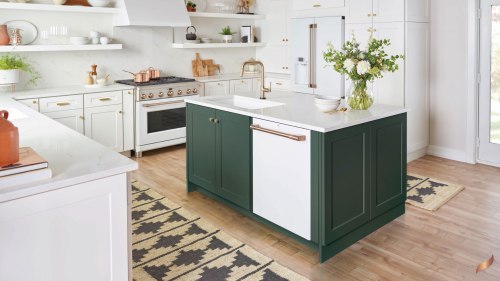 from 2 to 3pm eastern

by adding #KBtribechat to your tweets!

Here’s where you’ll find the transcript for this KBtribechat.

Is the work triangle still relevant?

Even the novice has heard of the work triangle in connection with kitchen design.  It’s the imaginary line between the sink, range and refrigerator. These items need to be thoughtfully placed for efficient use of the space.

Is the work triangle only relevant for small kitchens?

Can we throw out the rule if an island is involved?

Blue is not a good color for the kitchen!

Do you agree with this statement?

Color “psychology” has taught us that not only is blue an appetite suppressant but  food does not look good against it. Does this translate to the kitchen?

Do you have pictures that prove this wrong?

Bathroom sink cabinets should be 34″ high.

This has long been a standard but is changing.  Tall clients often want taller counter heights in their bathrooms but is this a good idea?

We will be discussing these “rules” and more on Wednesday, May 15, 2013.  Join our Twitter discussion by adding #kbtribechat to your tweets between two and three pm eastern time. We look forward to your input!

On Wednesday, February 6th,  Patti Johnson will be hosting #kbtribechat.  She will lead us in a discussion on the design features of timeless kitchens. Our twitter chat is from 2 to 3pm eastern time. Join us!

As the owner of Patti Johnson Interiors, a full service Interior Design firm located in Ohio, Patti is a Professional Member of CID and IDS and served as President of The Interior Design Society in Ohio 2008 – 2010.

PJI has added Commercial Spaces to her resume and her design work has been featured in HouseTrends, ATHOME magazines and other local publications. As a contributor to various publications writing design advice articles she also engages readers on her blog “Chatti Patti Talks Design” and is currently participating in The Dayton Philharmonic ShowHouse to open this May.

Active in Social Media, Patti served as Chief Chat Ambassador for the popular Twitter based Interior Designer Chat for 2010 & 2011, a participant in the Brizo #Blogger19 program and recently traveled to Europe with Modenus as part of Blog Tour London.

Patti Johnson Interiors specializes in “Transforming Spaces Into Beautiful Places”, in both residential and commercial disciplines and enjoys working in a collaborative manner with Clients and an established team of professionals to provide solutions and bring the client’s vision to life.

To learn more or interact with Patti, visit these links:

On August 1, 2012 we will be giving our advice on Kitchen Renovation Mistakes to Avoid at #kbtribechat on Twitter from 2 to 3 pm eastern time.  Please join us!

Here are our discussion questions:

1.) What are the biggest Kitchen Renovation mistakes to avoid?

4.) What mistakes regarding Appliances should be avoided?

5.) Any cabinet storage mistakes to avoid?

Here is the transcript to this very informative chat!

On Wednesday, July 11th, Brenda S. Lynn is hosting kbtribechat.  She will be leading a discussion on remodeling kitchens and bathrooms.  We will be sharing our tips for making sure a remodeling project runs smoothly.  We want ideas that we can share with the families going through this process and for the professionals doing the work.   Join us from 2 to 3 pm eastern time on Twitter.

Brenda is a kitchen designer from Huntsville, Alabama who has much to share about making the remodeling process easier on the client.   Most recently she was employed with Gobble-Fite Lumber Co. Inc. as a kitchen and bath designer from May 2009 thru June 28, 2012.  Her newest position is with Kith Kitchens, a division of Kith Companies, as customer service representative/corporate designer/2020 specialist.

Brenda shares her insights on her blog Sweet Magnolia Style and Ramblings.

Here is the transcript to Brenda’s kbtribechat.

On Wednesday, June 13, 2012, we will be discussing Kitchen Trends at #kbtribechat on Twitter! Join us from 2 to 3 pm eastern time.

1.) What cabinet styles are trending? Describe them.

2.) What countertop and backsplash materials are you finding popular now?

3.) What colors are trending now in Kitchens?

4.) Are you seeing any plumbing fixture trends? What styles? What finishes?

5.) Are you seeing any appliance trends?

7.) Do your clients what certain storage solutions?

Click here to see the transcript of this kbtribechat!

Poggenpohl at KBIS in Chicago!

Janine will be sharing the new +ARTESIO® kitchen, a concept developed jointly by celebrated architect Hadi Teherani and Poggenpohl. Going far beyond the fitted kitchens typically found in the industry, it provides an all-embracing solution in an architectural melting pot fusing furniture design, wall, floor and ceiling integrating ventilation, lighting and sound. +ARTESIO® is a comprehensive concept in which the aspects of building, architecture, home living, cooking and kitchen all coalesce, continuing the Bauhaus philosophy of “form follows function.”

We’ll also be touring the Poggenpohl booth along with several of the #kbtribechat members attending KBIS. You can expect to see lots of pictures shared by the ‘tribe.’

Don’t miss this exciting Twitter chat from KBIS, our K&B industry show! It promises to be a fun and informative hour for all. For those visiting Chicago, the +ARTESIO® kitchen will also be unveiled at the Poggenpohl Showroom (suite 138) in Chicago’s LuxeHome (@LuxeHome_Chi) at the Merchandise Mart during KBIS.

Here is the transcript for this chat.